I’m the first to admit that I don’t often call out a government agency for doing something right, but I doubt I’m not alone. So color me happy that I have the privilege of doing just that–especially when it’s because of their presence on social media.

The U.S. National Weather Service has an office here in Billings, 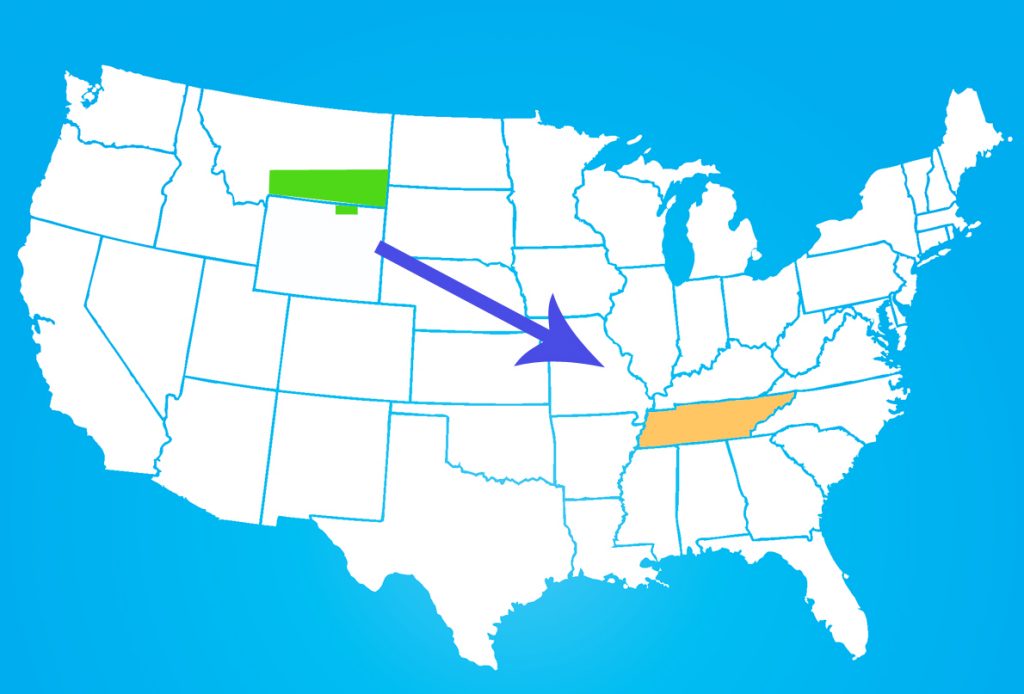 Montana staffed with meteorologists and other professionals whose job it is to study, forecast and inform about the weather.  It is how they use social media–Facebook in particular–to inform those living in or traveling to our area for which I applaud them most.

First, I want to share their area of responsibility which, according to their website, takes in 15 counties in south central Montana as well as Sheridan County, Wyoming.   For those living in smaller U.S. states, this may not seem that impressive, until you realize that those counties take in more than 40,000 square miles.

That’s about the size of the entire state of Tennessee. 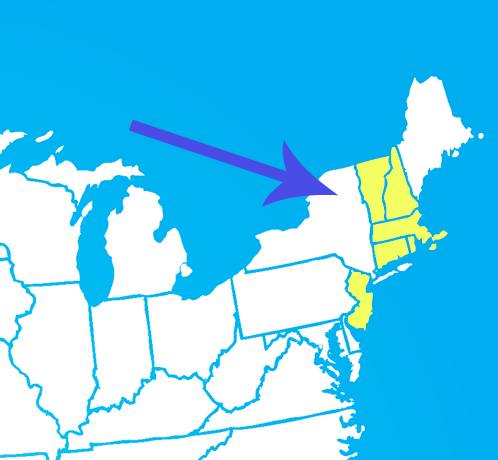 Their service area also takes in about 250,000 people–about a quarter of the population of Montana–including many in the small rural communities our part of the country is known for. So how do they keep us all informed of upcoming weather concerns?  Facebook and Twitter.

In December 2016, this region was hit by waves of snowstorms–some of which are still happening as I write this post.  The most significant began in the middle of the month, with not only significant snowfall, but also hazardous winds and sub-zero temperatures. As the peak of the storm grew nearer, the US National Weather Service’s posts grew more frequent, and they used a variety of techniques to share information in a variety of ways:

On their Facebook page, the Weather Service provided radar images and updates along with explanations about what the images indicated. Not only do these types of images grab attention and lend a “scientific” emphasis to their reporting, but also provide insight into how they work and what they look for in forecasting events.

The use of video on the US Weather Service’s Facebook page is a useful technique for a whole host of reasons.  First, the use of Facebook video continues to grow as a tool used to reach and engage users.  The videos used on this page do both–and do a great job of educating those users as well. Another benefit: we all know that Facebook loves native video and often places it above other types of posts as part of their algorithm.  This draws more attention to the page itself (good for the page) and increases the likelihood that the target audience is going to see often critical messages.

Some of the other types of posts the Weather Service includes on their Facebook page are charts (yes, it really was that cold), infographics, photos and other images.  Each shares a different type of information, whether what’s to come, what to look for or how to take precautions in extreme weather. 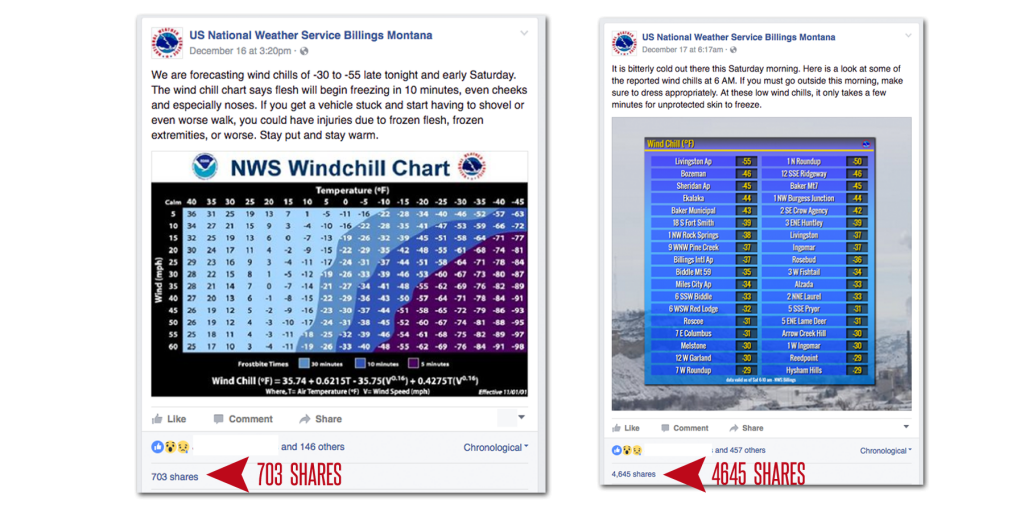 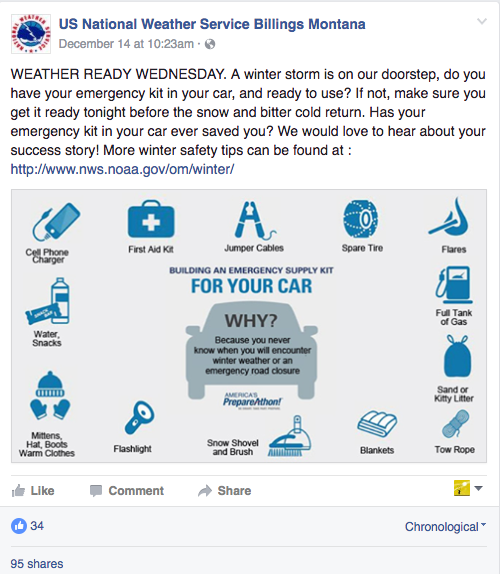 One thing that the Billings office of the U.S. National Weather Service does incredibly well is encourage its audience to participate on the page. People can post weather events from their location any time, serving as their own “weather reporters.”  Sometimes, the page requests posts, such as during the local snow event.  In addition to the call for images shown below, which garnered more than 130 responses, the Weather Service has also asked for images of blowing and drifting snow in certain areas, noting that doing so can help to save lives of those living in the area or traveling along the I-90 corridor which spans much of our state. 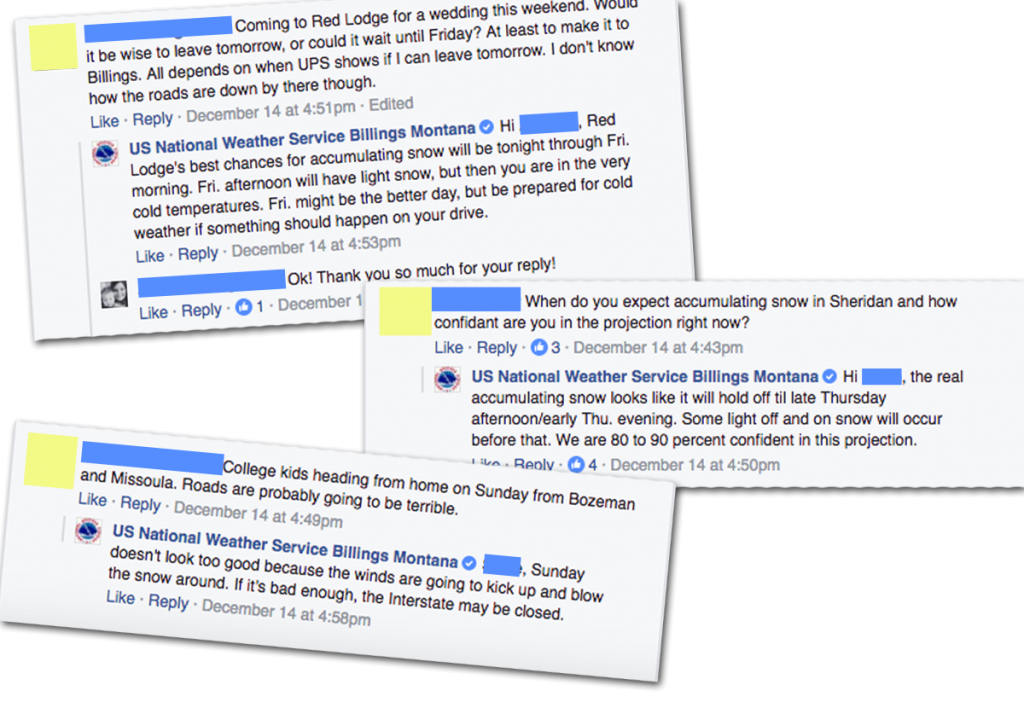 Asking for participation is only the beginning.  The forecasting team also maintains an incredible amount of engagement with the audience. During this and other weather events, team members answer visitor questions as quickly as possible, sharing key information about road conditions, school closures, travel advisories and additional safety-related items. While not answering every query, they take the steps most important when it comes to social media management:

As you can see, the U.S. National Weather Service in Billings is doing so much right when it comes to using social media to share much-needed information to their service area. As a social media professional myself, I find it impressive to see how well they’re using these tools to facilitate their work and their role in our communities. I’m not alone in thinking so.  It’s not unusual to have people from other locations throughout the United States who are either from Big Sky Country (or who will be visiting it) express their appreciation on the service’s Facebook page. They’re also quick to indicate how much they wished their local weather office provided the kinds of information we have readily available.

The only flaw I can find? They can’t seem to find a way to turn off all of this snow.  I guess we’re just going to be stuck with it a few days (or weeks or months) longer. 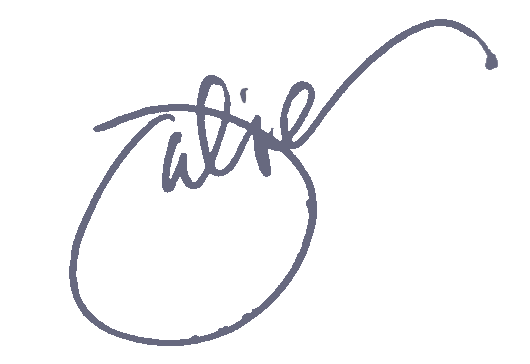