Almost anyone who has visited Billings, Montana and certainly every one of its residents knows about the Moss Mansion. Built in 1903, it has stood as our community’s “Grand Lady,” with many of its original and charming features remaining intact for more than a century. It is maintained by the Billings Preservation Society, and my friend Stephanie just happens to be a member of its Board of Directors.

In 2014, not long after Box 117 Creative was established, Stephanie asked if I would be willing to write the book for the organization’s annual Heritage Home Tour, which kicks off the Moss Mansion’s busy season.  My answer was a resounding “yes!”

Writing the book that year allowed me the chance to meet the most captivating people and tour some interesting homes. One of my favorites that year was the home of Jessica Smith, a local artist with a truly fascinating life story.  I also got to sneak a peek in one of Billings’ oldest homes on Virginia Lane, tour a beautifully updated cottage on Yellowstone Avenue, learn more about a 1950’s era ranch, and hang out in a loft as cool as the young lawyer who owned it. It was an experience I enjoyed, but not one I thought I would have the chance to repeat.

That’s why I was pleased the following year when I received another call and was asked to write the guide for the second time.  Once again, I enjoyed each of the homes I got to tour and the owners I had the chance to meet–and I learned a little bit along the way.  I never knew, for example, that Smokey Lane was named after Will James’ horse, until I got to tour the home once owned by the late writer/artist. Likewise, I had never seen the artwork of Loren Entz until I interviewed him in his home–one designed by CTA founder Everett Terrell for Will James’ compatriot Earl Snook. It was a pleasure seeing the stunning new Kibler & Kirch Design Studio just before it opened and talking to its owner, entrepreneur Jeremiah Young. And I loved finally getting to see the beautifully restored interior of a Poly Drive home I’d driven by for years.

Sadly, when I received the call last year, my schedule wouldn’t allow me to undertake another book for the 2016 Heritage Home Tour put together by the Billings Preservation Society. So imagine my surprise when I got a text from Stephanie this spring, asking me if I would consider undertaking the tour guide interviews in 2017.  I was able to say yes–and I’m so glad I could.

For 2017, the Board decided on a theme for the tour, and it was one that surprised a lot of people. It would focus on Mid-Century Modern homes in Billings–a style few people associate with our community. In addition to Pub Station, there would be 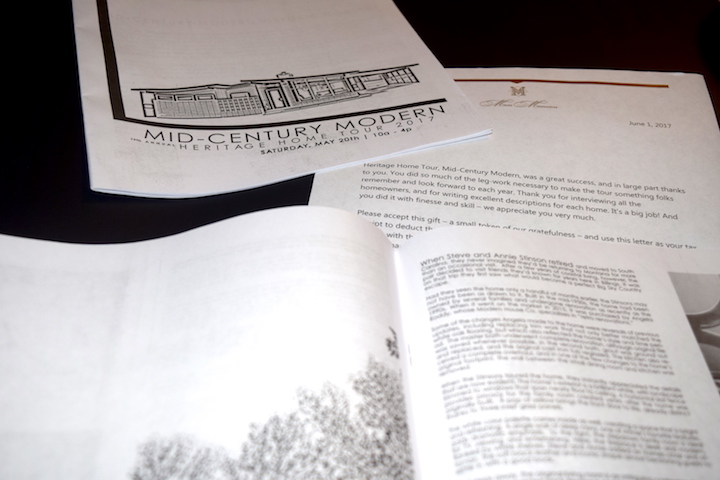 6 homes in the tour, each of which (I would come to find out) is owned by individuals who appreciate the architectural style for different reasons. It was also a joy to discover that while the homes possessed some similarities in terms of overall design, each was unique. One has retained virtually all of its original design components, from its cinderblock planters to its Lauan paneling. Another, destroyed by fire, was rebuilt to encapsulate many Mid-Century elements while incorporating today’s aesthetics. A third bore little evidence of its Mid-Century Modern roots, but in its basement tour guests would find a symbol of the times: a Cold War bomb shelter.  All in all, however, the homes blended the best of both “then” and “now” and it was a great experience for me to have the chance to share those elements in the guide.

So why am I sharing this experience?  Why am I including it here on the Box 117 Creative blog?  The answer is this: because it illustrates why I most love being a writer.  My job allows me the remarkable opportunity to meet people, learn about them, hear their life experiences, and then craft a story that encompasses them. I have the same chance  when it comes to helping a small business or a large company share who they are. The tour guides I have been able to do to help support the Moss Mansion even give me the chance to tell the stories of places–whether it’s the houses that have been homes to countless families, or the community that my family and I have called home for more than a decade. For that, I have to consider myself very lucky indeed.

To learn more about the Moss Mansion, or to find out how you can support it, I hope you’ll visit their website, MossMansion.com.