In early 2014, not long after I launched Box 117 Creative, I was contacted by the special publications team at the Billings Gazette. Working in conjunction with the Billings Chamber of Commerce, they were in the process of creating a new quarterly publication called LINK, and asked if I would write a story for the new magazine. Having worked on Magic Magazine and other Gazette publications, I was happy to do so.

Writing the lead story, “Defining Tomorrow” was a great opportunity to meet new members of our business community.

As a freelance writer for over 5 years, I knew several of the individuals I was to interview, but was excited to talk with others to whom I had not yet been introduced. Every person to whom I spoke was gracious and excited to share their ideas about the future of our city.  Given the fact I was just starting out on my own, hearing their enthusiasm was infectious, and gave me greater insight as to the possibilities for both personal and professional growth right here at home.

As with any project, not everything goes as smoothly as one would like. In this instance, the story was nearly to press when one of the main individuals I had interviewed stepped down from his position. Working frantically with my editor, I was able to set up an interview with another community leader, rework the story to accommodate his thoughts and replace the lead-in faster that I ever thought possible. 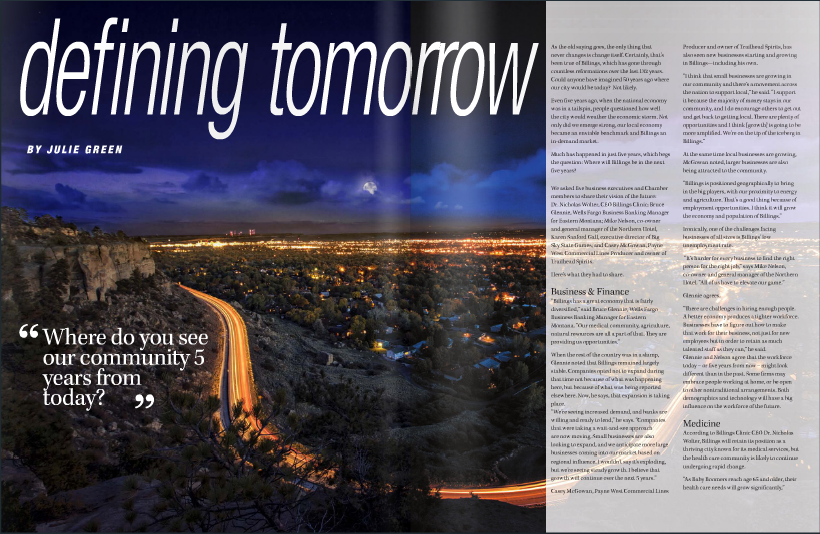