One of the most valuable assets any company has is its brand. That’s no secret among those in the marketing world, which is why there’s always a bit of surprise when a brand goes off brand.

First of all, a quick primer on the concept of brand.  There are many definitions out there to be sure; one of my favorites comes from advertising great David Ogilvy, who long ago penned a brand is “The intangible sum of a product’s attributes: its name, packaging, and price, its history, its reputation, and the way it’s advertised.”  Another comes from Ann Handley:  “Brand is the image people have of your company or product.”

One of the most remarkable brand “builds” in my mind was that of Dos Equis. Prior to the launch of its “Most Interesting Man in the World” campaign in 2006, I’d never even heard of the product. Now I have to give a disclaimer here that I don’t actually drink beer; however, I was certainly familiar with other campaigns from Budweiser, Coors, Corona and Heineken (which owns Dos Equis.) Within the first year the ads began to run, with its “don’t always, but when I do” messaging however, Dos Equis was, in my mind, leading the pack when it came to brand recognition.

What attracted me to it?  Certainly, the combination of storytelling, wit and improbability made it memorable. The not-quite-old, not-quite-young face and sophistication of actor Jonathan Goldsmith was compelling. Even the carefully paced voice overs drew me in–although one of my personal favorites lacked the voice over:

The campaign’s success unsurprisingly gave rise to imitation (along with a dizzying number of memes).  But recently one such copycat campaign has caused me to shake my head. Why? Because it was done by a more than century-old national brand, and its attempt to be “cool” makes it only seem all-the-more desperate.

I give you Lee Jeans “The Lee Man”:

Notice anything familiar?  If you don’t, I’ll be surprised.

When the new spots rolled out, AdAge reported that the new ads were a throwback to the founder’s view of a “can-do” lifestyle.  They quotes VF-Cor’s VP of marketing, Kim Yates, “There’s this playfulness, an unpretentious nature of who we are that’s always been there in the humorous way we approach the consumer and we wanted to bring that back.”

The problem is that there is nothing remotely similar to the Lee brand of past years in this new campaign. It also seems outdated, even though it’s a new campaign.  It is equal parts laughable and sad that GSD&M, the agency which has created stellar work for Walgreens, Southwest Airlines and the US Air Force, also created these ads.  In fact, I can’t help but wonder if these ads were the folks at Lee dictating “we want do the Dos Equis ads but with denim” and essentially not giving GSD&M any real choice. (Yes, I’ve seen these types of scenarios firsthand).

So what’s the takeaway here?  Here are 3 primary branding lessons I’ve been reminded of as I’ve watched the latest Lee Jeans campaign:

Now perhaps I’m wrong, and Lee Jeans will become the new Dos Equis; only time will tell. But my guess is that this campaign will eventually be replaced by something that’s a little more true to the brand they’ve been building since 1889.  In my mind, that’s a good thing. Because I don’t always write about brands, but when I do, I want them to be good ones. 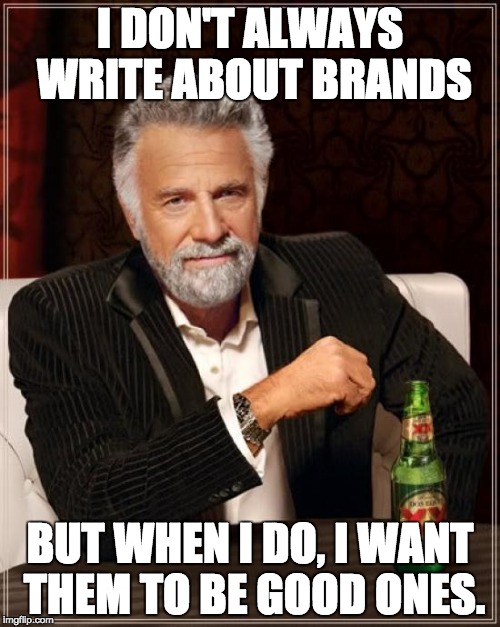